Most Common Injuries in Soccer 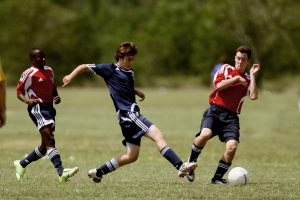 Lets just jump right to it; the top four time-loss injuries in soccer are:

– ligament injuries to the ankle

– ligament injuries to the knee

– muscle strains to the hamstrings

– muscle strains to the groin

However, it’s tough to pin down which is the most common because each is more prevalent at different levels and ages of play. As well, they too depend on whether the athlete is male or female.

That said, here is an overview of top occurrence:

However, the injury that is always in the top 4 and leads to the most concern, especially amongst middle and high school aged females, is an injury to the knee. Specifically the anterior cruciate ligament (ACL). 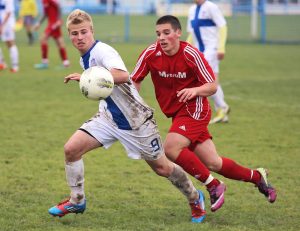 It is certainly the most serious of injuries because it simply ruptures requiring surgical repair and extensive rehabilitation time can take 6 – 12 months before return to play.  Peaking in high school aged athletes, the injury is still quite prevalent in adult athletes and is six times more common in women than men!

Now, one might think that this injury is the result of contact and collisions.  However, the unique nature of this injury is that in most occurrences, athletes rupture their ACL in a non-contact manner! The question is, why?

The answer lies in the way in which the ACL works to protect the knee.

Among one of its primary limiters of excessive motion, the ACL stops too much rotation of the femur bone on a fixed tibia bone when the knee is near full extension. It is the exact mechanism that takes place when a player plants their foot and changes direction.

Theory exists, that when the player is not sufficiently ‘warmed up’ or they are fatigued, the muscular control of the movement lags and places too much stress on the ligament.

It cannot be stressed enough that a proper warm up is essential to preventing all types of injuries.  This is particularly true in soccer.

dry land training to enhance the specific fitness to participate in competitive soccer.  The most successful programs combine core strength and neuromuscular control of the knee during cutting and landing motions.

Describing these types of prevention programs is beyond the scope of this article.

However, for an excellent warm up that can also be used to improve physical fitness, performing the FIFA 11+ warm up routine is an excellent start!

← How Can We Encourage Youth to Participate in Sport? Over Training →