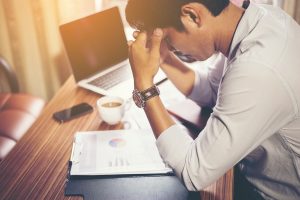 Crossed Postural Syndrome is an oft overlooked, under diagnosed syndrome that is endemic in modern society.  Sitting in front of your computer forty hours per week is a major contributing factor.  The 1997 United States census showed that 51% of individuals worked at a computer for the majority of their work-day.  Eight years later, it’s estimated that over 100 000 Canadians lose time from work as a result of work related repetitive strain injuries. Increased reliance on automation and computerization means that these figures are only increasing.

Repetitive strain is the process by which we do something too much, too hard or for too long.  With inadequate rest periods, repetitive strain ultimately leads to tissue overload; the point at which your body can no longer compensate for the strain we exact on it.  Once we reach tissue overload, our body has to devise a new strategy to deal with the continued, repeated strain.

The solution that our body comes up with is both ingenious and problematic, a type of “plan B”: Scar tissue formation.

Small fibrous adhesions accumulate between muscle layers, between different muscles and between the fascia and muscle itself.  Fascia is a thin, three dimensional mesh-work of in elastin connective tissue that covers each muscle in our body and influences both a muscles shape and its function.  The accumulation of scar tissue succeeds in tightening muscle and fascia that is no longer able to contract in a healthy, normal way.  Scar tissue build up impairs the functional range of motion our muscles and ultimately initiates a dysfunction.  The culmination of this chain of events causes a predicable pattern of alternating tight and weak muscles.  Clinicians refer to this pattern as a “Crossed Postural Syndrome” but most people recognize it as chronically bad posture! The name “Crossed Postural Syndrome”  literally derives from the relative location of tight and weak muscles.

invokes images of the classic “slouched over the computer”

posture.  The forward arm carriage causes the chest muscles to remain in a consistently shortened position. The upper back muscles are continually under a tensile load attempting to keep your arms stabilized.  In order to overcome this slouched position and look up at the computer screen, we have to activate the muscles at the base of the skull (the “suboccipitals”).  These muscles, like the chest muscles, are in a shortened position for inordinate amounts of time, while the deepest neck flexor muscles are being stretched and inhibited at the same time.  The inhibition of the neck flexors and simultaneous tightness of the suboccipitals is not a coincidence!  We can loosely define inhibition as “impairment in efficiency” of a muscle or nerve.

Neurological inhibition is a technical term for a protective mechanism that your body often employs.  Try to contract both your bicep and tricep muscles at the same time while moving your arm: you’ll find that you can’t do it!  From a neurological stand-point, the contraction of one muscle “inhibits” the antagonistic (opposite) muscle group from contracting at the same time.  Hence, the shortened, tightened position of the chest and suboccipital muscle groups in Upper Crossed Postural Syndrome inhibits the deep neck flexors and upper back muscles from contracting efficiently.

is characterized by people demonstrating a “sway back” postural stance in which the buttock and stomach protrude.  Tight hip flexors and lower back muscles characterize this syndrome. Neurological inhibition and constant stretching of the lower abdominals and gluteal muscles promotes this easily identifiable posture (see figure).  Lower Crossed Postural Syndrome can lead to a number of complaints, including lower back pain and sacroiliac joint dysfunction.  In fact, the functionality of the gluteal muscles link to sacroiliac / pelvic joint function. Weak, lengthened and inhibited lower abdominal muscles subject the joints of your lower back to greatly increased loads and increased risk of injury.

Managing these syndromes is something that is best done through a co-operative approach with your practitioner.  Through a regime of treatment, specific strengthening and stretching, you can help restore the balance of strength and tone in these muscles.

Order of operations is of significant importance to the success of rehabilitation programs for Crossed Postural Syndrome.  Too often, people with this syndrome waste needless time and energy trying to strengthen weak muscles without stretching tight muscles.  Stretching first effectively “turns down” the neurological inhibition, allowing the weak, lengthened and inhibited muscles the opportunity to contract more normally.

On a more global scale, consider these three determinants of success when approaching any repetitive strain injury:

← IT Band: Should You Roll It? Chiropractic and Pregnancy →

Not All Vitamin D is Created Equal

Do As The Flamingos Do