The iliotibial band (IT band) seems to be a confusing structure. Is it muscle, tendon, or fascia? What does it actually do? Should I roll it when it becomes sore and tight? 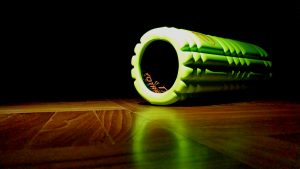 In short, the IT band is made of thick, strong connective tissue (fascia) and by itself doesn’t really do anything. The band is actually an extension of the tensor fascia latae (TFL) and allows this muscle to act as an abductor, medial rotator, and flexor of the thigh. It also works with the TFL and gluteus maximus muscles to support the knee while standing, walking, running and biking.

This means when the area of the IT band along the side of your leg seems to be tight, the culprits are generally the TFL and/or the gluteus maximus pulling on it. When these muscles put tension on the band, it pulls it tight and closer to your leg bone. This is why you can sometimes see a dent along the leg.

So what does all of this mean when it comes to rolling out the IT band?

Rolling the IT band is a lot of pain for very little gain.

When the muscles that act on the band get tight, they essentially suck the band to your leg. It makes no sense to go in and push it even more against your leg, squashing it further. Yes the tissue can get adhesions, but rolling directly is not the best way to get them out. Nor is this the top priority. We want to focus on those two powerful muscles that act on the IT band to release the tension at its source. Rolling out the glute max and TFL is going to be a lot more efficient than rolling the band itself.

The IT band can also adhere to tissue under or around it when it becomes taught. This indicates you can roll in front of and behind the band to help keep it from catching on the lateral quads and hamstrings. Your practitioner such as massage, chiropractor or physiotherapist will draw the band away from your leg bone. They use various manual techniques and possibly encompassing myofascial cupping. Acupuncture is also an effective tool used to release these tensions and manage pain.

Don’t roll you IT band! Work the hips, quads and hamstrings!